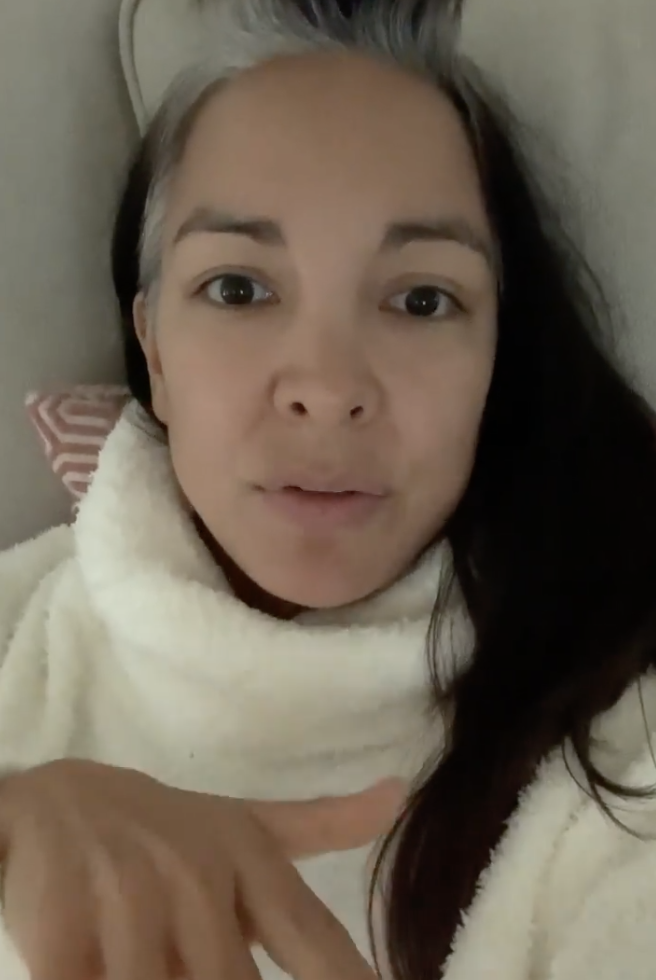 This post has adult concepts in it (again) so please be forewarned.

Last night was another wild experience.
My girlfriend @emilystellafletcher and another friend Adam came over for dinner. Adam brought over his vibrating sound mediation table to lay on afterwards.
When I laid on the vibrating table with headphones and blindfold on, I had no idea what I was about to get myself into. I took one puff of cannabis (twice in one week I know! I felt like more was spiritually coming out so I trusted taking a puff to assist the deeper unlocking) and once again, I blasted off.

(Responsible side note: Smoking is a rare thing for me so I want to be clear that this is not a permission slip to abuse it.)

Emily started off by doing a womb reiki activation and I felt the energy fully, even if she was not touching me.

Then the vibrating table was turned on and it was really intense on my body and the initial shock of it scared me, which then triggered me to go deep into the space of experiencing near-death. I saw myself sinking below the earth’s surface into water and floating inside water. I teetered back and forth between wanting to live and the acceptance and peace of death. I heard Hiro’s cries as I was dying and that made me want to not let go.
My whole body started shaking uncontrollably, my teeth were chattering and it was UNCOMFORTABLE – like I was for real having a near death experience.

Then all of a sudden, I was on a birthing table, giving birth and I started moving my hips like I was pushing a baby out. Raw birthing sounds were coming out of my mouth.

But I was dying on the birthing table…And it finally made sense. When I did my Bufo ceremony 3 months ago, an elder woman was there – she was an intuitive healer and she said to me right after my ceremony “I saw that you died giving birth in a past life and in this ceremony, you just cleared it out and released it. That storyline no longer continues. You are safe now.” The interesting thing is that I did not experience that in my ceremony three months ago and found myself quite skeptical of her story, but then, in the most profound way, I experienced it viscerally last night.

I saw myself dying on the birthing table, and feeling scared that I wasn’t going to be able to take care of my baby. Then all of a sudden, a big wave of golden light came flooding into my vagina and was swishing all over my womb all the way up to my heart, like it cleared it out and cleansed it, and revived me, just like the intuitive elder said! It was wild!

It made me confront my birthing experience with Hiro where I did feel like I was going to die. When I was wheeled into the operating room for an emergency C-section, under bright scary fluorescent lights and a dozen doctors and nurses pulling and prodding at me – as Hiro’s first cries were heard and relief washed over me – I started crying and the phlegm in my nose and mouth started going to the back of my throat, but because I had the epidural and it was so strong, my ability to swallow was not working and so the phlegm was choking me. After what felt like minutes of not breathing, I gasped to Andrew to help me breathe and he rushed to get one of the doctors to suction out the phlegm that was blocking my throat. If Andrew wasn’t there looking at me, there was no doctor right next to me who was able to hear my light gasps because they were all behind the curtain stitching me back up. Hearing Hiro’s cries while I was “near-dying” on the table, were the cries I heard when I was sinking into the earth last night. It all made sense now.

I think I’ve had some real trauma and fear around the birthing process, which I finally worked through and released last night with the shaking and the release of that traumatic experience.

I had another breakthrough last night as well: Andrew asked me a question “Do you think everything’s going to be ok?” And his answer is a resounding yes but mine was a no until last night. I used to live as though everything was NOT going to be ok so I had to constantly protect and prove myself. Where I got to was that everything is SO OK and always will be, no matter what obstacles get put in my way. We all put so much meaning on everything and it was time to let them go.

New neuronal pathways were created last night and the last remaining trauma lodged in my body was shaken away. I am sitting in so much gratitude and peace right now.

Ps. I read this afterward which made me feel even more in balance: “Shaking, or tremoring, is a natural response of the body to trauma, intense emotions and the activation of kundalini energy. Mammals after having near-death experiences will often shake for an hour to restore balance.”